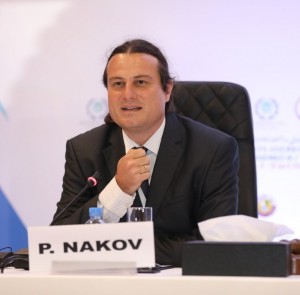 Dr. Preslav Nakov is a Principal Scientist at the Qatar Computing Research Institute (QCRI), HBKU. His research interests include computational linguistics, “fake news” detection, fact-checking, machine translation, question answering, sentiment analysis, lexical semantics, Web as a corpus, and biomedical text processing. He received his PhD degree from the University of California at Berkeley (supported by a Fulbright grant), and he was a Research Fellow at the National University of Singapore, a honorary lecturer at Sofia University, and research staff at the Bulgarian Academy of Sciences.

At QCRI, he leads the Tanbih project, developed in collaboration with MIT, which aims to limit the effect of “fake news”, propaganda and media bias by making users aware of what they are reading. Dr. Nakov is the Secretary of ACL SIGLEX and of ACL SIGSLAV, and a member of the EACL advisory board. He is member of the editorial board of TACL, C&SL, NLE, AI Communications, and Frontiers in AI. He is also on the Editorial Board of the Language Science Press Book Series on Phraseology and Multiword Expressions. He co-authored a Morgan & Claypool book on Semantic Relations between Nominals, two books on computer algorithms, and many research papers in top-tier conferences and journals.

Detecting the Fake News at Its Source, Media Literacy, and Regulatory Compliance

Given the recent proliferation of disinformation online, there has been also growing research interest in automatically debunking rumors, false claims, and “fake news”. A number of fact-checking initiatives have been launched so far, both manual and automatic, but the whole enterprise remains in a state of crisis: by the time a claim is finally fact-checked, it could have reached millions of users, and the harm caused could hardly be undone. An arguably more promising direction is to focus on fact-checking entire news outlets, which can be done in advance. Then, we could fact-check the news before they were even written: by checking how trustworthy the outlets that published them are.

We will show how we do this in the Tanbih news aggregator (//www.tanbih.org/), which aims to limit the effect of “fake news”, propaganda and media bias by making users aware of what they are reading. The project’s primary aim is to promote media literacy and critical thinking, which are arguably the best way to address disinformation and “fake news” in the long run. In particular, we develop media profiles that show the general factuality of reporting, the degree of propagandistic content, hyper-partisanship, leading political ideology, general frame of reporting, stance with respect to various claims and topics, as well as audience reach and audience bias in social media. We further offer explainability by automatically detecting and highlighting the instances of use of specific propaganda techniques in the news (https://www.tanbih.org/propaganda).

Finally, we will show how this research can support broadcasters and content owners with their regulatory measures and compliance processes. This is a direction we recently explored as part of our TM Forum & IBC 2019 award-winning Media-Telecom Catalyst project on AI Indexing for Regulatory Compliance, which QCRI developed in partnership with Al Jazeera, Associated Press, RTE Ireland, Tech Mahindra, V-Nova, and Metaliquid.